Ten Times As Big As A Man

This review originally appeared on the Anime Jump website in 2005. 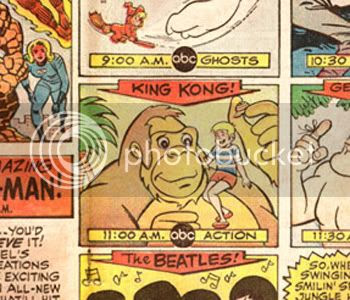 Back when UHF television was the great babysitter for the nation, all sorts of crazy shows wound up getting syndicated and parceled out to the upper reaches of the broadcast dial. One of those shows was KING KONG / TOM OF T.H.U.M.B. Long after its original 1967 premiere as part of ABC's Saturday morning lineup, this show got a new lease on life entertaining children on weekday afternoons after school. That�s where I saw it, sandwiched between MIGHTY HEROES and ROCKY & BULLWINKLE. Watched, enjoyed, filed away as a pleasant memory; and only when I got copies of episodes from some guy in Australia did I notice that KING KONG / TOM OF T.H.U.M.B. was animated by the Toei Animation Company of Japan, the same folks who produced many of the other shows that populated my personal pantheon of TV potentates. Who woulda thunk it?

Actually, KING KONG was one of the first co-productions ever attempted between hungry American cartoon outfits and cheap Asian animation studios. It's a system that proved lucrative for both parties and would lead to greater and greater percentages of American TV cartoons being written in the States and animated in Japan or points east. KING KONG's American side, Rankin-Bass, would later become famous as the producer of THE HOBBIT (a Toei co-production) and those endless Christmas specials starring stop-motion puppets of Burl Ives and Fred Astaire and the kicky character designs of MAD MAGAZINE stalwart Paul Coker Jr. Rankin-Bass's predilection towards cherry-picking top American illustration talent is evident in the credits for KING KONG, which lists MAD and EC Comics legend and good ol' Georgia boy Jack Davis as character designer. It's hard to spot after the layers of cleanup, but his touch is visible, especially in the older characters. 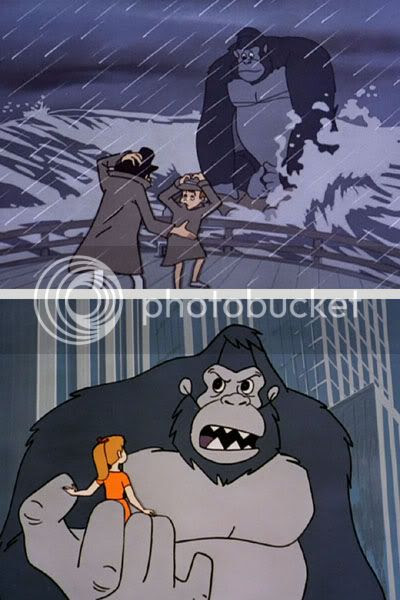 But enough of this trivia. What about KING KONG? Well, for what it is, a 1967 TV cartoon written in one continent and animated in another, this show is pretty entertaining. It's got a great theme song ("TEN TIMES AS BIG AS A MAN!!"), the animation is stripped-down basic, the character designs show the clean-looking international style so popular with all Japanese exports of the period, and the stories are all self-contained 8-minute vignettes with little time for anything but action. 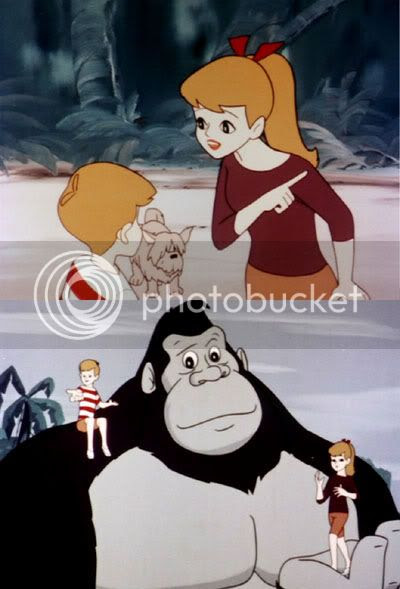 Bobby, Susan, and their hairy friend. And Kong.

Young Bobby Bond lives with his scientist dad and teenaged sister Susan on Mondo Island, home of the giant King Kong (copyright RKO Radio Pictures, Inc). Jimmy and Kong form a fast friendship and together they defeat monsters, invaders from space, centurions from the depths of the earth, evil white hunters, and the machinations of the evil Doctor Who. No, not the BBC guy with the police box, but an evil scientist who looks like Captain Marvel's Dr. Sivana as drawn by Chester Gould, full of dastardly plans to kidnap Kong and use him to either conquer or destroy the world, whichever comes first. You may remember him from the Toho film KING KONG ESCAPES - also a Rankin/Bass co-production. 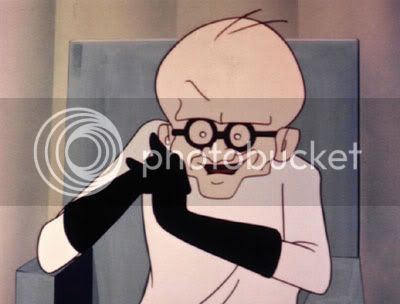 The Evil Doctor Who

As a cross between JOHNNY QUEST, GIGANTOR, FRANKENSTEIN JR, and ADVENTURE ISLAND the show fits neatly into the mid 1960s, a time when children's TV cartoons were able to feature action and adventure, a glorious age of fun and excitement ended only by the monstrous onslaught of Action For Children's Television. If not for these shrewish bluenoses, American animation might have continued to match Japanese cartoons in the two-fisted entertainment category, and American cartoon fans might now be obsessed with American panty-flashing maid shows instead of the Japanese ones. KONG enjoyed a bit of success in the �60s; merchandising included toys, books, and even a board game. 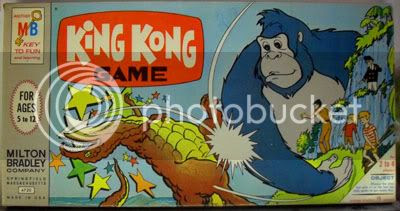 The companion show TOM OF T.H.U.M.B. is just as entertaining, if not more so. A wacky spy romp in the GET SMART vein, TOM stars a secret agent who used to be a janitor. He and his assistant, a stereotypical 60s �Oriental� named Swingin� Jack, were caught in an experimental shrinking ray and instantly reduced to Smurf proportions. Naturally his minature stature comes in handy when battling the evil plots of M.A.D. (which stands for �Maladjusted, Antisocial, and Darn Mean�, as we�re reminded every episode). The show is still fun to watch. The dialog is deliberately corny, the plots are bare-bones excuses for gags, and the agents of M.A.D. speak in foreign accents that range from Russian to Hispanic to Brooklyn, sometimes in the same sentence. Tom�s outfit, by the way, is the Tiny Human Underground Military Bureau. Yes, I remember all this stuff from when I was 8. And before you bring up INCH-HIGH PRIVATE EYE, this show did it first. 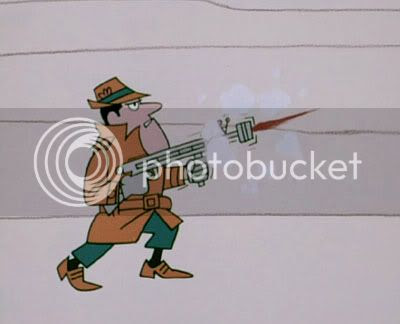 Tom of T.H.U.M.B. blastin' away 'cause he got little-man syndrome.

The DVD release is a swell package, you get 8 Kong episodes, each with 2 Kong segments and 1 TOM OF T.H.U.M.B. segment, separated by the original bumper segments. Vol. 2 has the KONG pilot episode as well. The transfer is sharp, and while the colors seem to be a bit washed out, that's understandable for a show that's been sitting in 16mm reels in somebody's vault for the past 20 years. I noticed some varispeed artifacting in one episode due to cheap time-compression, which is an odd thing to see in a show that hasn�t been broadcast in 20 years. Still, this is a $10 DVD you buy at Target, of a dimly-remembered licensed show from the mid-1960s, released by a now-defunct studio, so you can�t really expect Criterion quality. 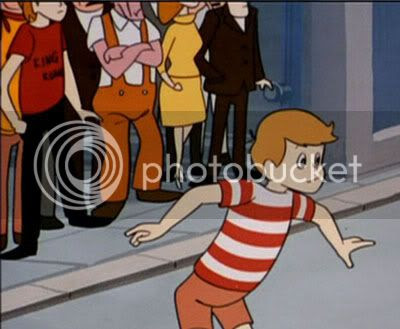 New York crowds already have King Kong fever as we can see by this bystander's T-shirt.

Sure, maybe this show is only getting a DVD release because of the current KONG film. So what? If it gets forgotten classics like this show onto home video, I�m all for it. Maybe this series will inspire more outfits to unlock their vaults and share the goodness with us. At $10 a pop (or less, nowadays) that�s hard to beat.