At AWA this year, I did a panel about spooky anime of the 60s and 70s. You know, ghosts, scary monsters, supernatural elements, all the things we were promised but didn�t really get here with �Casper The Friendly Ghost�. You see bits and pieces of these shows out of the corner of your eye as you dig through old This Is Animation books and back issues of Animage, but most of them are ignored on this side of the pond by commercial localizers and cosplaying fans alike. I figured it would be a good way to kill an hour at this past AWA, what with the convention being back in October and all, but in researching the topic I learned about shows I�d never heard of, which is always a pleasant surprise. The crowded panel room seemed to agree and most of the comments I got were things like �wow, I had no idea this kind of thing existed�. And that�s why we�re here! 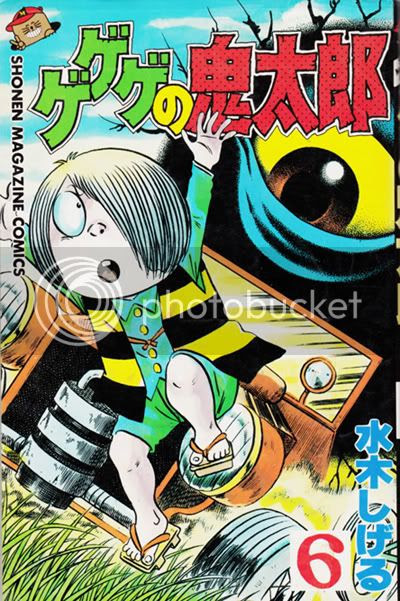 There's only one way to begin a discussion about classic supernatural anime, and that's with Shigeru Mizuki. After a childhood spent drawing comics and listening to ghost stories, Mizuki was drafted into the Imperial Army and sent off to New Britain where he suffered malaria, was listed as KIA, and lost his left arm in an air raid. His wartime experiences would inform his later non-fiction manga that bluntly confronted Japan�s role in the Pacific War, including the unflinchingly brutal semi-autobiography ONWARD TOWARDS OUR NOBLE DEATHS. After a stint working in the kamishibai field, Mizuki broke into manga in 1959 and has kept going ever since. 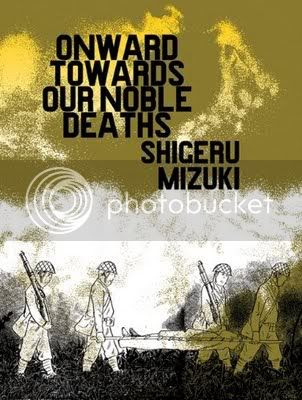 
His most popular series is GEGEGE NO KITARO, the story of a boy in a striped vest who walks the line between the �normal� world and that of the yokai, traditional Japanese spirits who roam the countryside, inhabit various objects or geographical features, and whose interactions with humans can be playful or deadly. Based on ancient Japanese folklore, tales of yokai were widely regarded as embarrassing hillbilly superstition, but Mizuki�s work highlighted their cultural significance and brought these stories to entire new generations of youngsters to boot. 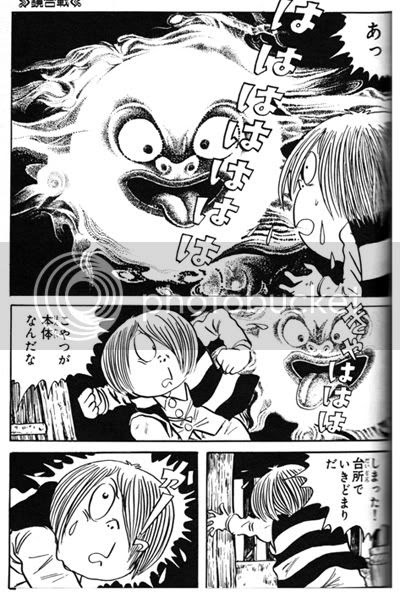 A bewitching combination of simplistic characters and highly detailed, tightly rendered backgrounds, Mizuki�s artwork is as appealing as any of his monsters or adventures. There�s a classical, hand-tooled look to his work that defies, hell, obliterates the clich� of manga as being slick commercial fad-driven hackwork. 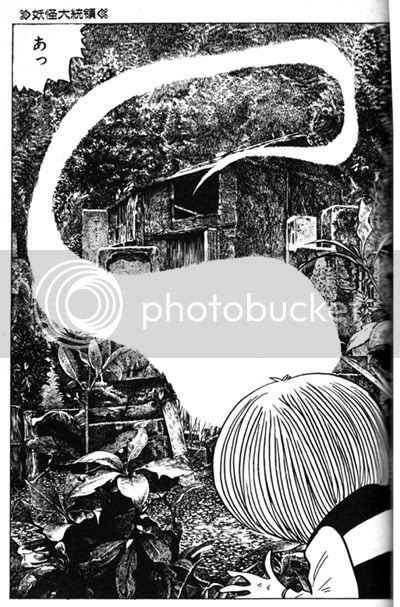 Kitaro, wanting peace between the yokai world and the humans, is always getting into trouble. Luckily his incredible mystic powers get him out of most scrapes, and his father, reincarnated as an eyeball with legs and arms, is always there to help. Not so helpful is Kitaro�s friend Nezumi Otoko AKA �Rat Man�, a wily schemer whose plans usually wind up going awry. A supporting cast of cat-girls, demon umbrellas, and haints & spirits of every description round out the series.

Mizuki�s KITARO is ridiculously popular in Japan. The original manga ran for ten years in Weekly Shonen, and it was animated for television in 1968, 1971, 1985, 1996, and 2007. There was also a live-action film in 2007. As a manga/anime property KITARO was merchandised like crazy, with all kinds of products like toys, stationery, video games, and utensils; in fact the whole panoply of anime marketing benefited from these creepy folktale characters. There�s even KITARO toilet paper. 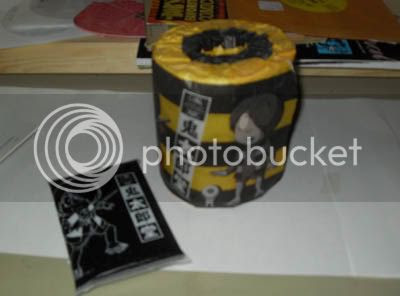 Oh, you thought I was kidding?


This was purchased at a KITARO-themed shop in Asakusa, Tokyo, where you could outfit yourself head to toe in KITARO gear and go out to bring peace between yokai and human. Naturally a show of such significant pop-cultural importance was completely ignored by the American �anime industry�. 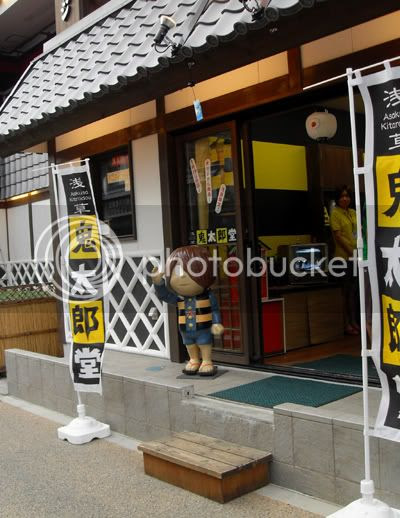 For all your Kitaro needs. Near a rickety old amusement park, too!

But that�s not the only spooky manga Mizuki ever created; his other supernatural manga hit was AKUMA-KUN. First appearing in pay-library manga in 1963, the series was rebooted for Shonen Magazine in �66, the pay library version was rewritten in 1970, and the character was revived in 1987 and again in 1993. 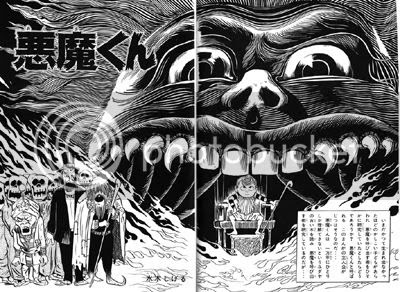 AKUMA-KUN has a more Western feel in its approach to demons and monsters but still has that great Mizuki look. The story is about Shingo Yamada, ostensibly a normal boy, but one day when he follows an old man into a cave he finds out that he has the power to control demons, namely Mephisto. Because Shingo is a good boy, he forces Mephisto to help him fight evil demons and monsters! AKUMA-KUN didn�t get animated until 1989 but in 1966 Toei made a live-action series out of the manga starring the kid who played Johnny Sokko in JOHNNY SOKKO AND HIS FLYING ROBOT. 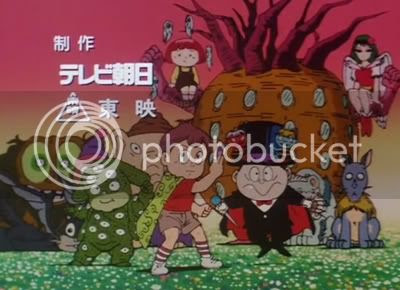 
In the United States, it took the mid 1960s TV horror hosts and a whole spate of sold-to-TV monster movies to create a �horror boom� that led to things like THE MUNSTERS, Famous Monsters Of Filmland, and �The Monster Mash�. But in Japan Mizuki�s KITARO and AKUMA-KUN manga helped spur a Japan-only �yokai boom� that led to scary kids� entertainment of all stripes. 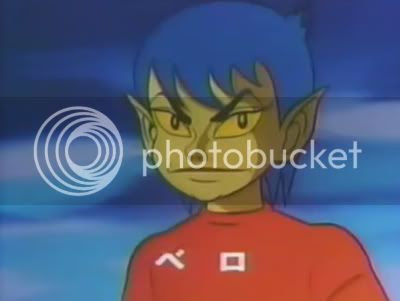 And if you want shows that would scare the hell out of childhood me, you need look no further than YOKAI NINGEN BEM. This 1968 color anime series from studio Dai-ichi Doga (who also produced the GOLDEN BAT anime) is about three yokai, Bem, Bera and Berro, who arrive at a large coastal city and find evil caused by both �immoral humans� and yokai, which they must of course battle. A live-action remake of this series is currently on the air! The anime has a great chunky late 60s feel that evokes JOHNNY QUEST, but with more fangs, drool, and horror. 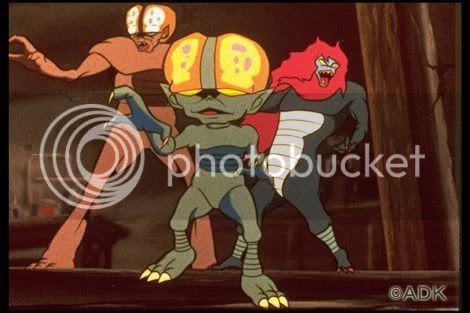 Manga-ka duo Fujiko-Fujio created the worldwide success DOREAMON, but their boundless creative energy had many manifestations; before the blue robot cat conquered the world in 1970 they created KAIBUTSU-KUN. Wouldn�t you like to have monsters for pals? Kaibutsu-kun does! His friends Dracula, Wolfman, and Franken make every day Halloween! They travel from Monster Land to the Human Realm, where they keep mankind safe from the monsters of the demon group Demonish. And fight over who has the better breakfast cereal. The 1968 anime series was from TMS and Studio Zero, the animation studio that Fujio-Fujiko was a part of along with Shotaro Ishinomori and others. KAIBUTSU-KUN joined the ranks of live-action series in April 2010. Is Japan in the grip of another monster boom? 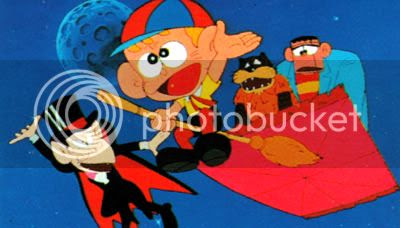 Fujiko-Fujio didn�t stop with KAIBUTSU-KUN � another supernatural manga from the prolific duo is OBAKE Q-TARO. Attaching himself to the Ohara family, Q-taro is a �obake�, a ghostly Japanese spirit who comes in many frightening and disturbing forms, none weirder than Q-Taro himself, who resembles one of those targets you knock down with baseballs at the county fair, only with feet and giant comedy lips. Q-taro loves to cause trouble and steal food, but he�s deathly afraid of dogs, so sleep soundly, pet owners. The anime series was produced on 3 separate occasions � 1965, 1971, and 1985, and the Nintendo game was released here as �Chubby Cherub�. No, seriously. 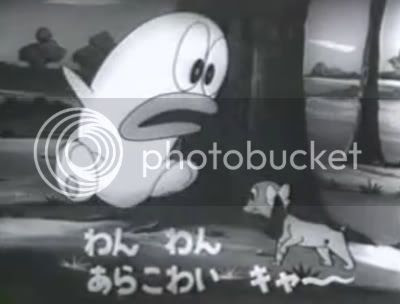 Obake Q-Taro is scared of dogs. 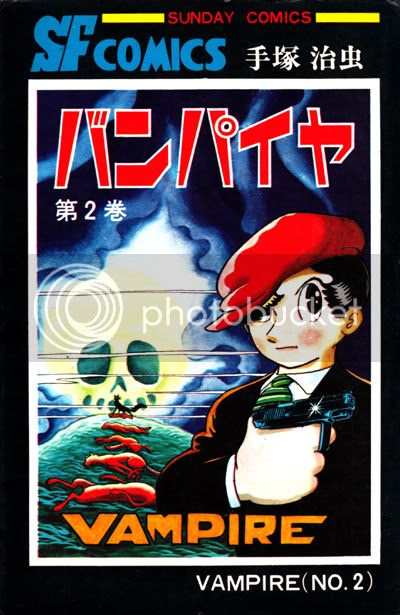 Speaking of manga legends, Osamu Tezuka�s 1967 manga serial VAMPIRE, though not dealing with the traditional blood-sucking freaks of legend, did star monsters and werewolves! The vampires of the title are beasts who, disguised as humans, walk among us regarding normal people as prey. It�s the law of the jungle when they transform into their animal shapes and hunt humans! Their long term plan is to overthrow civilization and bring us all back to our savage natures. However, young Toppei, a wolf-man, abandons the animal life and moves to Tokyo where he gets a job at Mushi Productions working for Osamu Tezuka, who starred as himself in the TV series. When did that guy sleep? And will the vampires let Toppei escape? Meanwhile stock Tezuka character Rock Home, this time a master-of-disguise criminal genius, seeks nothing less than the domination of the entire world. Can he force the vampires to do his bidding? In 1969 the series was turned into a live-action show that, even without the live-action actors interacting with the animated monsters, is a pleasure to watch just for the crazy new-wave camera work.

Toppei as a human, Toppei as a cartoon wolf, Tezuka as himself. Workaholic much? 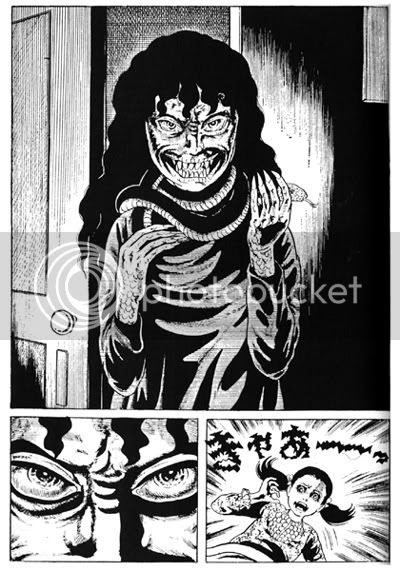 
Kazuo Umezu has a giant body of horror manga, including SCARY BOOK, CAT EYED BOY and THE DRIFTING CLASSROOM. His immensely disturbing work never quite made the jump to children�s TV anime, which is probably a good thing for the mental health of Japan. However there was a pilot film made for CAT EYED BOY, which I�ve never seen. Though I bet it�s disturbing. The 1990 anime �The Curse Of Kazuo Umezu� certainly is. And of course live-action versions of his manga abound, but make sure the kids are in bed. 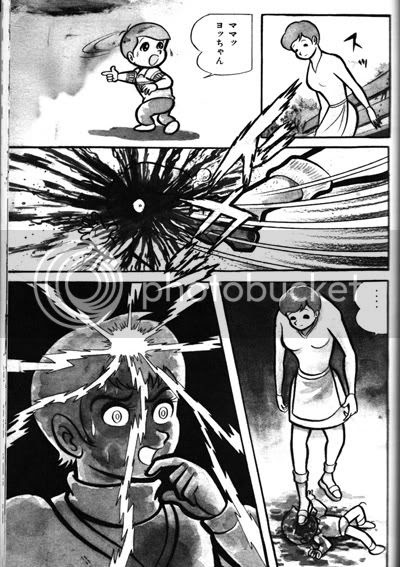 
Manga legend Go Nagai is mostly known here for the animated versions of his popular works like MAZINGER Z, GRANDIZER, DEVILMAN, CUTEY HONEY, and KEKKO KAMEN. However, his manga work has yet to really make any kind of headway in the States. Which is a shame because hey, he�s Go Nagai! Along with his more science-fictional or naked-girl themed manga he�s produced lots of spooky supernatural themed comics, of which DEVILMAN is probably the best known. 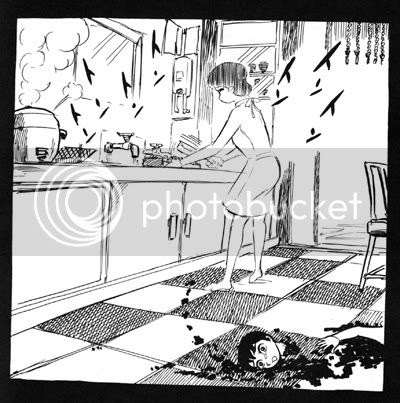 DEVILMAN became more of a super hero kind of thing when it made the transition to television, but another Go Nagai concept, DORORON ENMA-KUN, kept its spooky yokai spirit intact! Enma-kun, our hot-headed, lustful teenage boy protagonist, has eyebrows that can detect spirits and a staff which turns into a giant hammer. Enma-Kun is sent by his uncle, The Great King Enma, the Buddhist King of the Underworld and Judge of the Dead, to straighten things out here on Earth. Aided by ice demoness Yukiko-Hime, the kappa demon Kapperu, and his talking hat Chapeauji, Enma-Kun battles the demons that infest every inch of Japan! The 1973 TV anime was from Toei, but the 2011 remake DORORON ENMA-KUN MEERA MEERA was by Brain�s Base and will be released in North America next year! 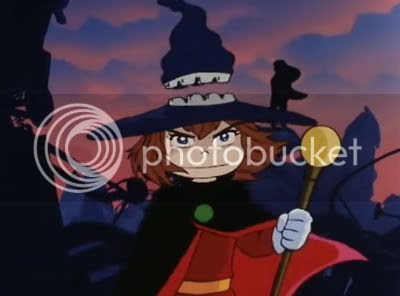 
So happy Halloween everybody, and when you�re shivering in your bed afraid of spooks, remember that GeGeGe no Kitaro and Dororon Enma-Kun are on their way.