Poll of the Month 3 Results:

My third poll of the month has finally come to a close. After a record shattering 487 votes, the results are in... 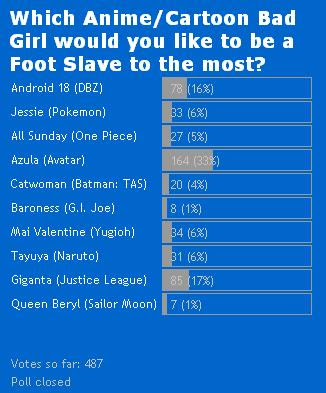 This time around...It wasn't even close. Azula completely burnt her competition in this poll, proving that her feet are the ones that most people would like to be a slave to. None of the other villainesses came close to touching this Firebending princess as she managed to claimed one vote after another bringing her final total to 164. (I'll post a winner's tribute for her tonight) Giganta took second place pulling in a respectable 85 votes and not far behind her was the sexy Android 18 (with 78 votes). Mai Valentine, Jessie, and Tayuya did pretty well too each garnering over 30 votes for themselves. Ms. All Sunday and Catwoman both scored in the 20's and even Queen Beryl and the Baroness proved that they had some fans out there with 7 and 8 votes each.

A huge thank you to everyone who voted. It wouldn't be nearly as much fun tributing these girls without your support and I really appreciate it. Thanks for sharing your opinions with me and I'll keep them in mind for my future writing and bonuses.

Ok...not only is it a new month but it's a friday as well. It looks like I'll be pretty busy not only preparing my usual end of the week entry but posting a tribute for Azula and a new poll of month as well.

I'll try to have all of those up around midnight.