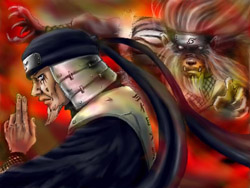 The Third's real name is Sarutobi, but it is not known if this is his given or family name. It is often believed that the Third and Sarutobi Asuma are related, because they share the name Sarutobi. However, Sarutobi is Asuma's family name, while it is most likely the Third's given name. It is also strongly suggested that Sarutobi is the Third's given name because his summon Enma continuously calls him by this name, and Jiraiya remembers calling the Third as Sarutobi-sensei when he was a young Genin, the same way that Naruto and his teamates refer to Kakashi by his first name.

Third Hokage SarutobiHis name is inspired by Sarutobi Sasuke. Sarutobi means "jumping like a monkey", and his Kuchiyose no Jutsu summons an ape. Monkeys are known usually as a Japanese symbol of wisdom. "Hokage", made up from the words "Ho" (fire) and "Kage" (shadow). In Chinese, the kanji is read as "Huo" (fire) "ying" (shadow)

A Ninja who has achieved the name of Kage (Shadow), the strongest ninja of a Hidden Village, the Third Hokage was the leader of Konohagakure. Mostly referred to as the Third because he was the third of five Konoha ninja to gain the title Hokage; his face was also the third face on the monument carved on the mountain overlooking Konoha Village. In the beginning of the manga and anime, he and Umino Iruka were virtually the only people in Konoha Village to have any sympathy or liking for Naruto. 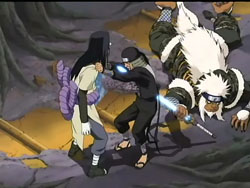 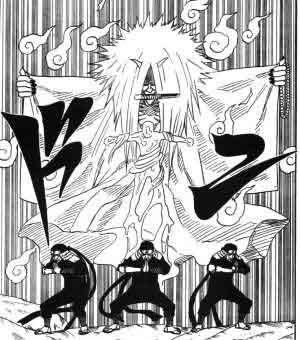 Said to be the strongest among all the Kage, he was called The Professor (Purofessau) or even God of Shinobi (Shinobi no Kami) because of his genius. He had a large and impressive arsenal of jutsu, which he had learned over his many years serving Konohagakure. In fact, he was said to know all the jutsu from Konohagakure. However, his strength had begun to decrease with his old age, and he was - initially, at least - no match for even his former student, Orochimaru, when the latter led the invasion on Konoha. Also, the Third was burdened with feelings of guilt for not having stopped his former student and being faced with the two previous Hokages that Orochimaru summoned. These factors also contributed heavily to the Third Hokage's reluctance to battle the Snake Sannin with his full heart, as was noted by Enma.

Having no other choice, the Hokage decided to sacrifice his life to seal Orochimaru's soul much like the Fourth Hokage did to the Kyubi. Third Hokage SarutobiHis old age and weakened state (including, but not limited to, his being impaled upon Orochimaru's Kusanagi no Tsurugi (Kusanagi Sword)) did not allow him to seal Orochimaru's whole soul, however, so he chose to only seal Orochimaru's arms, taking away his ability to use ninjutsu and sacrificing his own life.

The third was previously the student of the First and Second Hokage, and the sensei of Orochimaru, Jiraiya and his successor, Tsunade, the Fifth Hokage, who are now known as the Densetsu no Sannin ("Legendary Three Ninja")
Posted by Cyber Media at 7:10 AM