Wow...its amazing how much can happen in a couple of weeks. :-) Once again I'm playing catch up. First off I just want to wish everybody a Happy New Year. ^_^ I hope that you all had fun over the holidays. For my part I had a really good time. Florida proves to have a lot of awesome places to check out and I think I definitely needed the break. I still have 2 weeks of vacation left but I definitely feel a lot more relaxed. Anyway...renewed, refreshed, re-energized and having found a high speed Internet connection to take advantage of ... I'm back to give some more anime girls feet some more attention.

Picking up right where I left off...I'm a couple of days late...but let's see how the Ice Girls Poll turned out...After 1282 votes...here are the results... 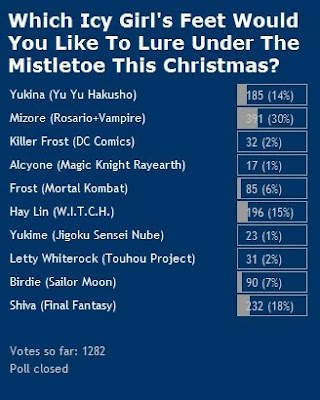 O_O It looks like Rosario+Vampire's Mizore froze her competition in their tracks and managed to pick up the win with 391 votes . ^_^ In second place was the Final Fantasy Ice Summon Shiva and the playful W.I.T.C.H Haylin claimed 3rd. Don't feel too bad for the rest of these girls none of got too chilly a reception and even the ultra rare Sorceress Alcyone had 17 fans falling at her feet.

Ok...I just want to give a huge thanks to everyone for voting and as always I'll keep your opinions in mind for bonuses and chapters. :-D I'll try to post a tribute to Mizore (as well as finish up the GTS tributes and do some posts for Bulma) soon.

Since I'm off to a late start, I think I'll hold off on posting a new poll this month guys. With three women out there that I still need to tribute, I think that it's probably better that I catch up a bit first. I still might post one later if I get a good idea or get a lot of requests for one. :-D

I'll also try to post a new mega-tribute tomorrow to kick off the New Year with style. ^_^

Alright...I hope that the coming year is a happy healthy and prosperous one for all of you. ^_^ Best of Luck Everyone!!
-KSC
Posted by Cyber Media at 9:53 PM