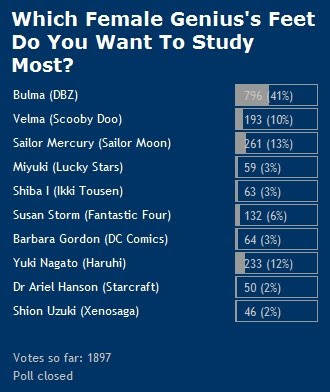 Well it looks like DBZ's girl genius Bulma has a wish granting dragon on her side. Not only did she manage to win this month's poll, she totally dominated her competition proving that her feet are the ones that fans most want to study with almost 800 votes (796 to be exact). O_O About 635 votes behind her, Sailor Mercury claimed second and Haruhi's Yuki Nagato claimed third. I wouldn't feel too bad for the rest of these women. Each of them managed to find their far share of foot fans to "study" with and even the Ultra rare Shion Uzuki managed to claim 46 votes for herself.

Ok...as always I just want to thank everyone for voting and I'll try to keep your opinions in mind for the future. I think that it goes without saying that Bulma is guaranteed a tribute soon. :-D (I aiming for two sets to her). I'll also add Mercury and the Haruhi anime to my watch list as well.

Just want to apologize for running a little behind guys. Every time I think I'm close to getting some spare time...something comes up. ^_^; I know that I still need to post the GTS tribute (which I'm in the process of working on now). I'll try to post that next with Bulma right after that. I'll also try to post a new poll later tonight. Definitely a lot of catching I need to do. Needless to say I'm looking forward to the Christmas breaks. ^_^ I'll try to post more frequently throughout December though.

Anyway, have a great day everyone!!
-KSC
Posted by Cyber Media at 9:55 AM