The World Only God Knows 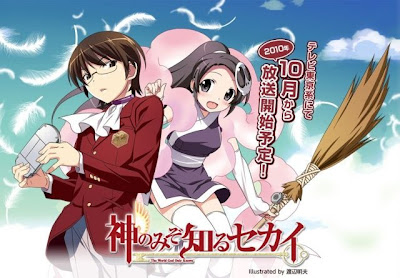 Keima is bishōjo gamer who is called "The Capturing God" on the Internet for his ability to capture any girl in any bishōjo game but does not like girls in real life. One day, he accidentally accepts a contract with the demoness Elsie to help her capture evil spirits that have escaped from hell and have hidden themselves in girls' hearts with the only way to force these spirits out is to make the girls fall in love with him. Keima angrily explains to Elsie that he doesn't like girls and his "capturing skills" only work in games but is shocked to learn that both of them will be killed by the magical collars on their necks if he breaks his contract, forcing him to comply. His first target is his classmate, Ayumi Takahara who is training for the upcoming track-and-field meet. Keima cheers her on by displaying banners using Elsie's magical raiment at the field everyday. While Ayumi is annoyed by his actions, Keima believes she will eventually get used to him and like him. After a confrontation with jealous seniors, Ayumi sprains her leg a day before the meet. However, Keima confronts her that night as he figured out that Ayumi faked her injury because her meeting with the seniors made her question her confidence. Keima consoles Ayumi and tells her to believe in herself, which makes her fall for Keima. They kiss when Ayumi keeps Keima from falling down the stairs, forcing the spirit out of her body and allowing Elsie to capture it. Ayumi wins the meet but loses all of her memories with Keima, though she blushes when Keima congratulates her. Much to his confusion, Elsie has transferred to his school, claiming to be his sister.
See the First Episode

Episode One - Part One of Two

Episode One - Part Two of Two
Posted by Cyber Media at 1:02 AM