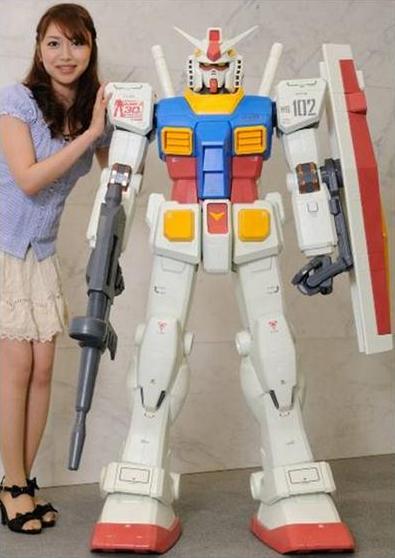 It’s so hard to win respect at the office. No one seems to appreciate all the funny email forwards you send. Displaying actual competence at your job is obviously out. And flashing your pink parts to intimidate rivals apparently only works in the animal kingdom.

Which leaves only one option: have you ever considered walking around with a giant Gundam?

If not, it’s time to send your coworkers into tremors of fear with Bandai’s astonishing five-foot tall, 100-pound Gundam figure. (Picture note: The war bot is significantly more intimidating when not posing next to a smiling Japanese girl.) Based on the wildly popular mecha anime franchise, the figure is modeled after the RX-78-2 Gundam created in Mobile Suit Gundam—which to non-mecha geeks basically just means this is the first, classic Gundam. For accessories, your new protector comes with a shield, beam rifle and beam saber. Admittedly, none of those weapons actually function—but your coworkers certainly don't need to know that.

Also, at 1:12 scale, these figures are obviously much smaller than the original humanity-dwarfing robots seen in the anime. But, let's be honest, that's probably for the best. You couldn't have fit a 60-foot tall robot into your cubicle anyway.
Posted by Cyber Media at 7:15 AM