A Klingon Christmas Carol
Scrooge has no honor, nor any courage. Can three ghosts help him to become the true warrior he ought to be in time to save Tiny Tim from a horrible fate? Performed in the Original Klingon with English Supertitles, and narrative analysis from The Vulcan Institute of Cultural Anthropology. The Dickens classic tale of ghosts and redemption adapted to reflect the Warrior Code of Honor and then translated into tlhIngan Hol (That's the Klingon Language). 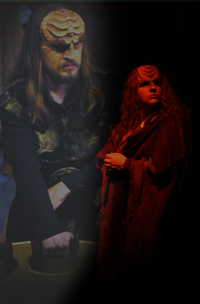 November 26 - December 19, 2010
at the
Greenhouse Theater Center2257 N. Lincoln Ave.
Chicago, IL  60614
http://www.cbtheatre.org/
Commedia Beauregard is honored to be the only theatre in the world to produce a full-length play in tlhIngan Hol every year. Since 2007 when the company teamed with the IKV RakeHell of the Klingon Assault Group, CommBeau has produced "A Klingon Christmas Carol" at a variety of venues in the Twin Cities of Minneapolis and Saint Paul. In 2010 the new home of "A Klingon Christmas Carol" is at the Landmark Center in Saint Paul, MN. AND we are taking the show to our new home in Chicago at the Greenhouse Theater Center, too!
*  Opening Night is sold out in both Saint Paul and Chicago! Tickets are still available for the other nights, but they are going fast. Don't delay!