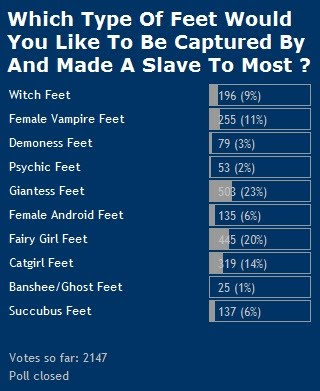 It looked like this time around the Giantesses crushed their competition proving that their huge feet are the ones that most fans would love to be captured by and made a slave to with 503 votes. In second place and really holding their own through most of this competition were the fairy girls. They were followed by the catgirls who claimed third. The rest of these supernatural groups of women all proved to have willing slaves of their own and even the rarer Banshee/Ghost type garnered 25 votes. Let's just hope that none of these women decide to come after us and torture us with their feet out of revenge for not winning the poll. ^_^;

Ok as usual...I just want to give a really big thank you to everyone for voting and I'll try to keep your opinions in mind in the future. ^_^ Giantesses hmm....that should be an interesting set of women to tribute. I'll also some great fairy and catgirl scenes (*Big Thanks to the Legendary Master of Sole Shots Match25 for those*) to post in the future as well. ^_^

Alright everyone...a lot of catching up to do. Yeah I know that last month was really slow. I'll try to post a lot more this month. :-D I try to post a new poll tonight and a Giantess tribute soon. Not to finish off the bonuses from last month as well. :-)
-KingsSideCastle
Posted by Cyber Media at 6:31 AM