Poll of the Month 4 Results:

The 4th Poll of the Month has come to a close. After a whopping 326 votes the results are in... 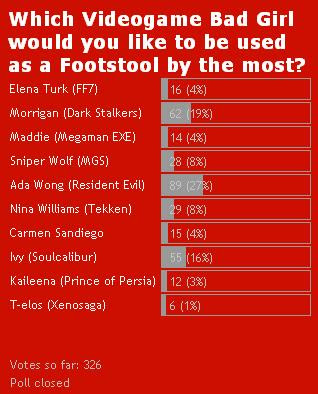 It looks like the sexy Ada Wong completed her mission and claimed the most votes in the poll proving that many people would enjoy being her footstool with 89 votes. I'll post a winner's tribute for her tonight. Keeping up with her for most of the poll was Morrigan Aensland who managed to grab second place with 62 votes followed by Ivy who definitive made third with 55 votes. They were followed by Nina Williams and Sniper Wolf who grabbed 4th and 5th place with 29 and 28 votes respectively. The rest of the girls all proved they had human footstools of their own with Elena grabbing 16 votes, Carmen Sandiego stealing 15 votes, Maddie taking 14 votes, Kaileena receiving 12 votes and T-elos holding onto 6 votes of her own.

Once again a Huge Thank You to everyone that voted. It was alot of fun seeing your opinions about these women and I'll keep them in mind in my future stories and tributes.

Ok...tonight I'll post a winner's tribute for Ms. Wong as well as a new poll of the month. Both of those should be up around Midnight.

Thanks again for voting Everyone!