Oh My Goddess!, also known as Ah! My Goddess!, is a seinen manga series by Kosuke Fujishima currently serialized in Kodansha's monthly Afternoon magazine. Originally a typical magical girlfriend/ romantic comedy, over time it has grown to feature more action and the latest variant has had a greater focus on developing the mystical aspects of the world in which it is set. There are also four anime offshoots. The title is a pun on the common phrase "Oh my God." [wikipedia] 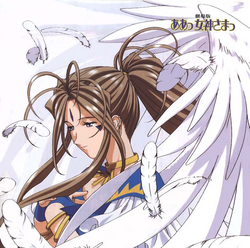