Once again sorry for the delay everyone...here is a super-sized bonus to make up for it. 20 uninterupted caps of the sexy Gundam pilot Stellar. 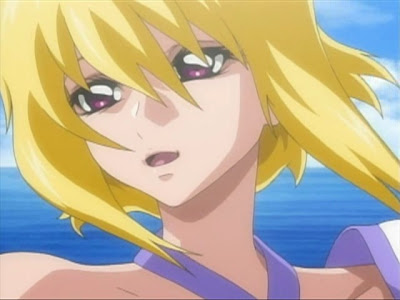 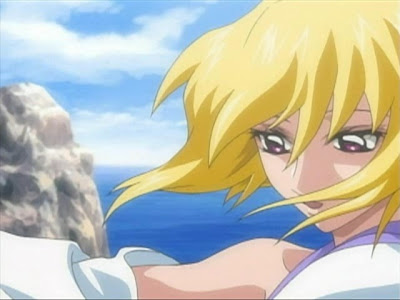 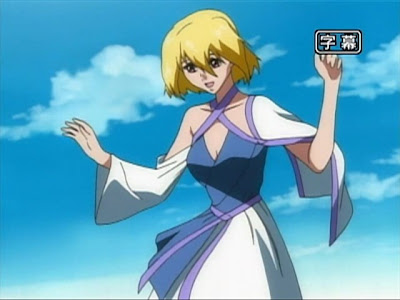 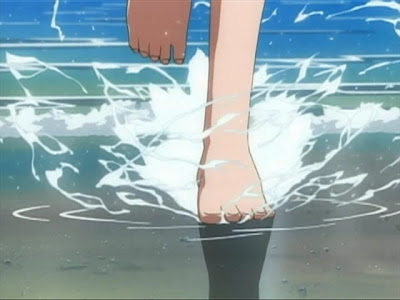 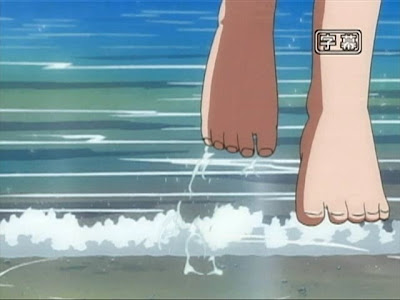 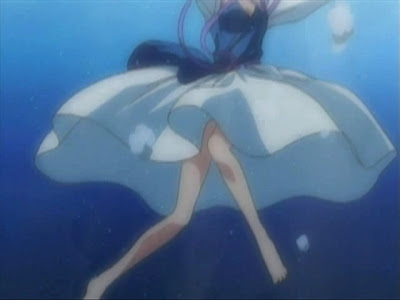 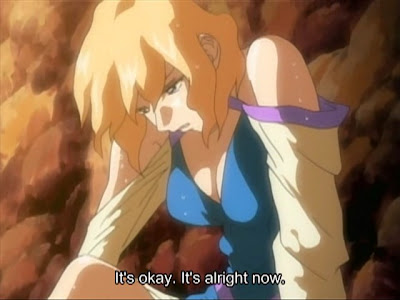 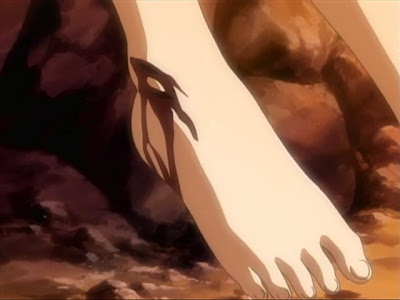 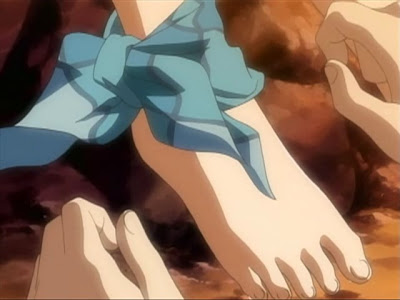 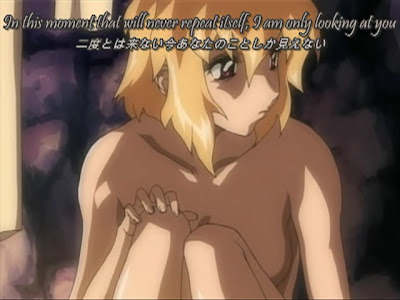 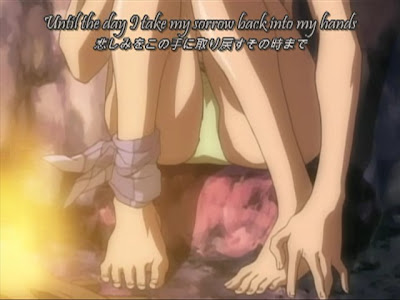 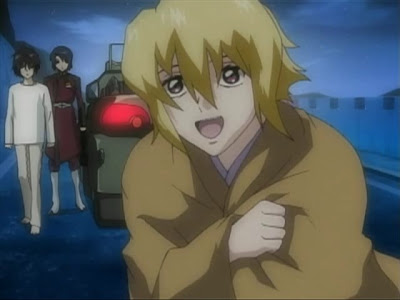 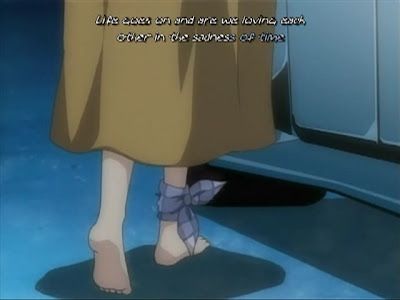 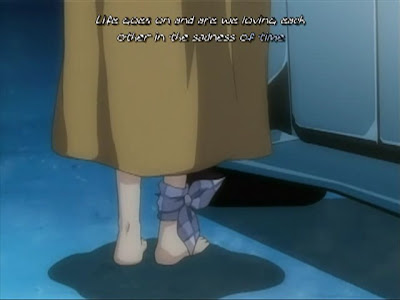 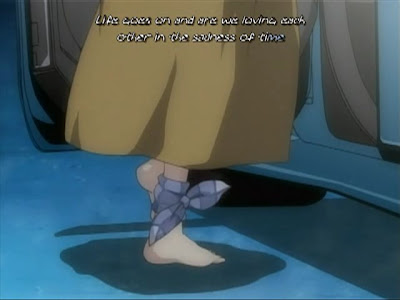 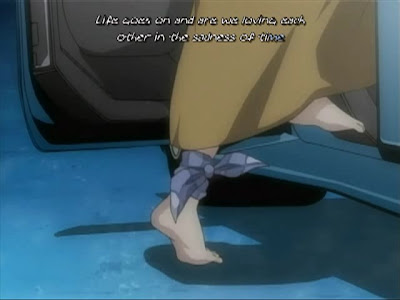 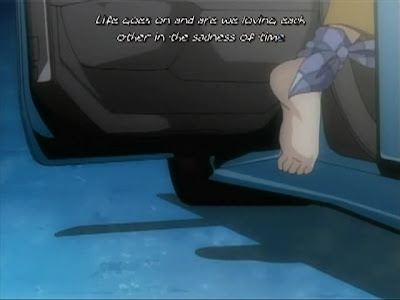 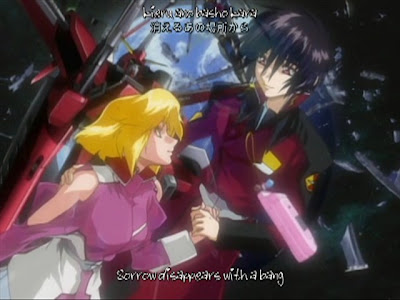 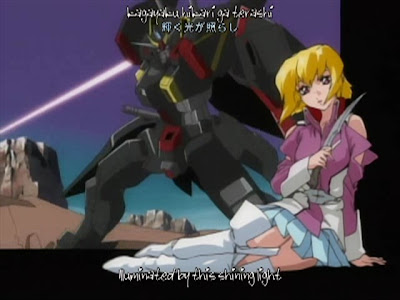 (These were capped from a few scenes in Gundam Seed Destiny Episode 21: First Stellar is enjoying a day at the beach dancing in the water barefoot. Later she actually falls into the ocean and has to get rescued by Shinn, the protagonist of the series. She cuts her foot on a rock and Shinn bandages her up. Lucky for us she stays barefoot for the rest of the episode.)

Although I wouldn't really classify her as a villainess, Stellar does cause the main character quite a bit of grief in the series. Stellar's pretty appearance and scenes in this episode aside, I wouldn't have put her in the poll because not only is she not popular enough but (like most female antagonists in the Gundam universe) Stellar is rather crazy*. On a side note...of the Gundam girls, Lady Une's role as a female antagonist in Gundam Wing brought her very close to making my poll. I'd post a tribute to her as well but unfortunately (being the tease that she is) she didn't bother losing her boots and stocking to give us a similiar scene. :-(

Ok before I go into an angry and bitter rant about Gundam girls that never took their footwear off (Murrue Ramias, Talia Gladys, Lunamaria Hawke etc), let's change the subject quickly!!

It was a slow week for me in terms of released chapters but I was able to get a few out. First me and SFD completed the Sailor Moon villainess de-booting match starring Sailor Galaxia, Mistress 9, Dark Lady, Nehelenia and Queen Beryl for his interactive. http://www.writing.com/main/interact/item_id/1349529/action/outline
I also added a couple of additions to the Jean Grey thread of the Comic Book interactive which you can check out here:
http://www.writing.com/main/interact/item_id/1393778/action/outline
The next chapter I write for her will finish this story arc. Also while you are there, check out JayJay's conclusion to the She-Hulk story thread. I talked about this story more thoroughly when I dedicated an entire entry to it earlier in the week.

There's one interactive that I really enjoyed reading that I would like to spotlight this week: The Naruto Giantess interactive by author Demyx. http://www.writing.com/main/interact/item_id/1171502/action/outline

This story has several foot related chapters from many of my favorite authors. By now probably most of you know that I have a soft spot for Ino Yamanaka and it certainly helps that she is one of the giantesses in this story but there are several other cute Naruto girls that are out to torture
people with their feet as well.
Next Week:
There's a lot of work that carried over from last week that I still need to complete. I'm still working on a Mary Jane Watson thread for the comic book interactive as well as the continuations to my Wonder Woman and Soulcalibur stories. (I'm trying to have the first Mary Jane chapter up today.)
In addition to those projects SFD has recruited me to help him with one final de-booting match. I don't want to spoil anything but this one should be good. There are also a few bonuses I would like to post here. Nope I didn't forget about Kyoko's anime scene. ;-) Obviously I have other stories and chapters that I would like to get to as well (Jean Grey, Supergirl, Huntress etc) but I don't know if I'll be able to squeeze them into this week.

Also...I know I'm definitely building up quite a backlog with all the interactives that I want to add to. Hopefully I'll be able to tackle that soon too.

Am I overextending myself? Well...maybe just a little. ^_^ Enjoy your weekend everyone!!!
-KingSideCastle

*By crazy I don't mean the good (I want to take over the world and make everyone else kneel at my feet or I have a sadistic penchant for torturing people) kind, I mean the completely out of touch with reality "feel sorry for her" kind.