I thought that I would give everyone a brief break from the villainesses and post some more Mary Jane pictures instead. Enjoy!! 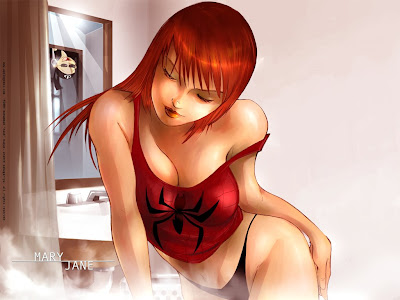 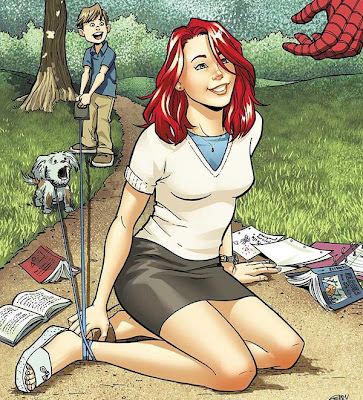 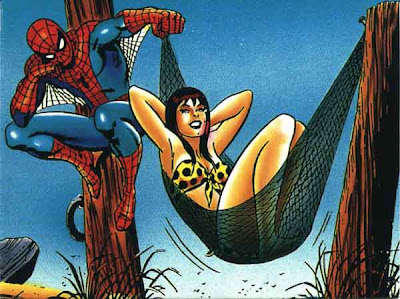 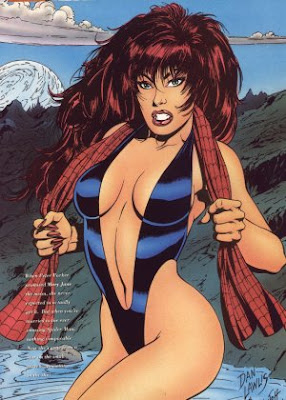 (All of those are webfinds involving the artwork of Dan Lawlus, John Romita Sr., Mohammed Haque and a few others. While most of these pictures are actual comic sketches, I couldn't resist posting a cool MJ wallpaper pic I found on a spiderman website.)

I've pretty much covered everything I've wanted to say about Mary in my previous bonus involving her so let's go straight into the weekly update.

Overview:
Despite the blog bonus I chose to end the week with. This week has been all about the top ten villainesses. I posted quite a few tributes to those bad girls over the past few day so scroll down to check if you've missed any. Obviously I still have a few more villainess to go. Hopefully I'll get to them before I end the month.

I've also spent a large part of the week working on the Fantasy de-booting league main event introduction which I'm intending to post tommorow evening. In anticipation of the big match...I created a small promotion space with bonus material which you can check out here:http://www.writing.com/main/view_item/item_id/1453986 True to my word...I've updated this quite a bit since my previous entry and I hope to get in another update or two before I post the first Main Event chapter tommorow.

There were also a few other project I managed to squeeze in as well. I added another couple of Mary Jane chapters (depicting the lovely redhead as sassy and sweet as ever) for my comic book interactive here: http://www.writing.com/main/interact/item_id/1393778/action/outline
and I also continued a Naruto/Ty Lee story arc for the Dylan's Naruto/Avatar interactive here: http://www.writing.com/main/interact/item_id/1341133/action/outline
I should probably add that my addition was quickly followed up by another Ty Lee and Naruto addition from it's moderator so that storyline is going pretty strong.

This week inspired by Giganta...I'm going to promote some GTS interactives. On Writing.com Stories involving Shrinking and Giantresses are pretty common but these are a few of my favorites that have been updated over the past couple of days...
The first is Shrunk with Family, Friends and More by the author Mr. E:
http://www.writing.com/main/interact/item_id/1418039/action/outline
This interactive contains a wide variety of GTS scenarios some of which involved getting tortured by women's feet. Two threads in particular that deal with this are the Julie and Bianca thread.

Another good GTS interactive that has been updated recently is the DBZ shrink interactive by the author the chance. http://www.writing.com/main/interact/item_id/1341367/action/outline In it Male DBZ characters find themselves the shrunken slaves of the female ones and almost every story thread involves the giantess using her feet as a way of punishing/torturing her tiny victim.*

There are also two more interactives that I recommend you keep you eye on in the future. While those don't have a lot of story chapters yet, from what I've seen of the author's writing...they are going to be really good.

The first is With Friends Like These by the author Daniel Wickie. http://www.writing.com/main/interact/item_id/1450643/action/outline Right now there are only two story chapters in this interactive but they stand out for their detail and description. The first is the opening chapter and the second is a lead in to an Azula storyline. If these chapters are any indication...the story should be great!!

The second story is Bleach Girls Feet Battle by the author Torborg
http://www.writing.com/main/interact/item_id/1453674/action/outline
This story involves the Bleach girls using their feet to torture others. While there are no storyline chapters yet...from what I've seen of this author's writing (Torborg wrote a series of Supergirl chapters for my interactive), this interactive is going to be awesome.

As the month finishes up I'll be releasing a series of tributes to the rest of the poll villainesses including the poll winner. Toward the beginning of the week, I'll also be working on the FDL main event. Also next week I'll give you guys a sneak peek at my mile long backlog of chapters giving you a warning of the danger of too many ideas and a slow writing speed.
All right...that's it for now. As usual more to come soon!!
-KSC

*Note: A keen reader might notice that I mentioned both these interactives before and they are right. In the past I have added to both those stories but I believe this is the first time I featured them in the spolights section.